Having a blog is a scary thing. Do I really share myself, or do I just write something that is hopefully entertaining to read? If I am vulnerable, I am holding myself up to be judged. But, I have determined to live a brave life, so here I go…

In the autumn of my season of parenting, I am awed by the adults my children are, or are becomming. I am pleasantly surprised that we think the oldest three are mature enough to get married. They take care of their finances. They take care of their health. They are 19-23 years old. The only reason I don’t include Lily in this is that she is 17 and still a minor. She is a very responsible 17-year-old, and I have no doubt that I’ll be saying these things about her also after she leaves our home.

Not too many years ago, a “kid” could graduate from high school at age 18, get a job, get married and live. They might work at Exxon or at Purity Dairies or for IBM. They would raise a family, maybe even a large one. Along with their wife, they would join a bowling league, or play bridge or golf – probably would be active in their church. After 35 or more years they would retire from their careers. They’d make it to 50 or more years of marriage.

Fast forward to 2010. When we hear that “kids” are getting married after they graduate from college at 22 or 23 (depending on if we held them back when starting school because they weren’t ready), we think that is too young. We question whether they are ready for this much responsibility. It’s hard for them to keep a job or stay in a marriage. Surely, you could make an argument to blame the culture, but I think the number one biggest determining factor in how and when children grow up and become responsible is how they are “parented.”

“Parented” is put in quotes, because I don’t know when it became such an action word, a verb. You were a parent – a noun. Obviously you wanted the adjective before the noun to be a positive one; the goal was to be a GOOD parent, but what was the definition of that?

Just like all of you, I read books about parenting from the time I had a line that showed positive on the pregnancy-testing strip; there is some great material out there. I read Dare to Discipline by Charles Dobson. Think it’s great, at least for children up to 13 years old or so. But I wish someone would write a book called, Dare to Raise A Self-Disciplined Person. Somewhere along the way, parenting seems to have become about control. I think this is motivated by fear. If we don’t control things, then the culture is going to eat our kids up. If anything the fear motivates us to control all the more when our children enter the teen years.

Now if my children are reading this, they probably will say that I controlled them. They claim that I made them go to bed at 7:30 when it was still light outside until they were in middle school. I dispute this claim totally, but do know that having had four kids in right under six years, I am sane, so maybe I did do things like that, I’m just saying….

What is my point? My point is discipline and control away, but at some point, (I think when your child becomes a teen) we need to move to a team approach. As a wise friend reminded me recently, it’s not “us” against “them;” it’s, “we are a team working together to reach all of our goals.” When your child leaves home at 18 years old to go to college, that’s it. Your parenting needs to be basically done. They need to have the skills to make their own decisions. They need to have already decided what their values are. God told Adam to leave his mother and father and cleave to his wife. He didn’t even have a mother and father. It was one of the first things God said about parenting. So, if you are a parent of a teen, remember the goal is to instill in them that they can do it better than you did. The goal is for them to leave and be an independent person, and for us to just sit back and be awed.

I tried out for cheerleader every year for 6 years. I REALLY wanted to be a cheerleader and thought I would be a great one if given the chance. Even though I have never been able to do a cartwheel, I actually made it pretty far each year until I would finally be cut. That says something for my enthusiasm, because believe it or not, I actually would do a forward roll for my gymnastics. Yes, a forward roll, commonly called a somersault – those things you teach your two year olds to do. Check your face right now, are you smiling or horrified? This probably speaks somehow to your temperament. You know I either have no pride, or I really wanted this.
It’s probably needless to say; I never made it. But, while going through Unwritten Travels during our most recent playshop, I came to a startling realization. I am a cheerleader! A cheerleader is an enthusiastic and vocal supporter who applauds and motivates others to get excited. What do I get to do every day for my job? I support women to go from where they are to where they want to be. I applaud them as they grow in their life. I thought I’d be wearing a mini-skirt and get to use pom-poms. It looks a little different than I thought, but I know it’s far more rewarding. That dream that was put on my heart way back as a preteen, came true and in even a better way than I ever thought possible.

Now, I’m looking back, taking time to remember what other dreams I may have forgotten. As I do, I am awed. Dreams really do come true. I have a charm bracelet. Although I don’t wear it much, it is a beautiful physical scrapbook commemorating life events. For Mother’s Day I know what I’m asking for, a charm of a pom-pom. If I wear my bracelet it will be with a much longer skirt that the one I would’ve worn back in school, but I’ll wear it with joy, and I won’t even have to do a somersault in public. 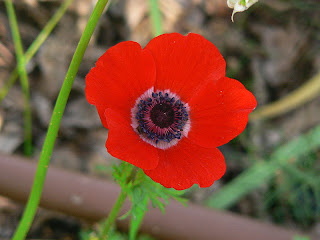 Many of my friends are wondering, “What now?” Their kids are growing up. They have more time. If they are working, they have freedom to decide if they want to change or stay in their current career. I was a stay-at-home mom. OK, I addressed Christmas cards for money. I made hair bows for a company from home.(I was really bad at that. Got paid hourly, and REALLY made about $2.00 an hour!) I worked part-time at various jobs for the YMCA, but basically, I was a career mom. Many wondered what I would do when my kids left home. I wondered. But with Lily, a high school Junior who drives and dances and dates and goes to her youth group, the only child left at home, I am filled with anticipation. I can now pursue new dreams. I know what my dreams are. I am in the autumn of life, but I am blooming. Looking up flowers that bloom in autumn, I discovered the anemone. Thought this was only something from Finding Nemo. It is also a land flower. Anemones – single vibrant flowers bloom atop long slender stems. Also known as wildflowers. Bloom in shades of pink, purple, red and white. Prefers full sun. Makes an ideal cut flower. Who wouldn’t want to be vibrant? Who wouldn’t want to sit atop ling slender stems? A little wild is good! The shades are perfect, and I certainly prefer full sun. Works well alone? Describes me! So I am an anemone, a hopeful one. Hoping that if you are reading this blog, you also will be excited about life whatever season you are in. Find your flower. Had shared my blooming thoughts with my husband. He surprised me by ordering some bulbs for me. I didn’t know that and bought some. We will have a yard full this fall. Just fine with me!!

Jenny Watson is more than a public speaker and life coach, she is a mother and a grandmother.